Emaline Eliza BROOKS, generally referred to as Emily, was born 27 January 1829, in Indiana to William BROOKS and wife Sarah, whose maiden name is unknown to me at this time. Emily married George W. TAGUE on 24 August 1849, and they had five children: four sons and one daughter. Their daughter, Sarah A. TAGUE, is my ancestor.

The family lived in Greenfield, Hancock County, Indiana. George was a farmer and a medical doctor. He served as a doctor and a Union officer during the Civil War. His final rank was Captain of Company B, 99th Indiana Regiment Volunteers. George W. TAGUE died of pneumonia at his home in Greenfield at age 64 on 28 March 1896.

After George died, Emily was a widow for 16 years before her tragic death when she was about two months shy of turning 84 years of age. As the newspaper death notice from the 14 November 1912 issue of The Hancock Democrat describes it:

Emily Tague, 83 years of age, widow of the late George Tague, was almost instantly killed at the crossing of the Pennsylvania railroad and East street in this city last Friday afternoon. She had gone from her home on East street, which abuts the railroad on the north, to the home of Mr. and Mrs. Joseph Miller, across the track northwest from her home. On returning[,] the local freight, with a freight car in front of the engine, was coming from the east as she was crossing the track and she was struck by the car coupled in front of the engine and knocked from the track. William Smith, of Railroad Street, who witnessed the accident, and one of the brakemen carried her to her home, only a few feet away, where she died some ten minutes later. She was the mother of William and Charles Tague and of the late Joseph Tague. The train was in charge of James O’Donnell engineer, and H. Cadell conductor.

I only just discovered how Emily died this past Monday when I was viewing her death record in the county office. The office manager at the health department commented on my reaction as follows: “Only a genealogist would get excited about that.” When I saw Emily’s cause of death, that it wasn’t something as common as flux, consumption, pneumonia, or tuberculosis, yes, I must admit, I got a little excited. Death goes with the territory.

Emily’s cause of death as written in her death record was, “Accident; struck by freight train: P.C.C. & S.&L. R.R. Causing fracture of skull & lower jaw bone.”

Although I was excited that I found an ancestor who did not die a “usual” death, I was and am saddened that she died so tragically. I like to imagine that the family must have been emotionally devastated at the loss of their matriarch. As I’ve said in previous posts, I like to imagine the good.

I have laid it out on a piece of the city map of Greenfield from the 1887 Atlas of Hancock County, Indiana, based on what was written in her death notice from the newspaper. 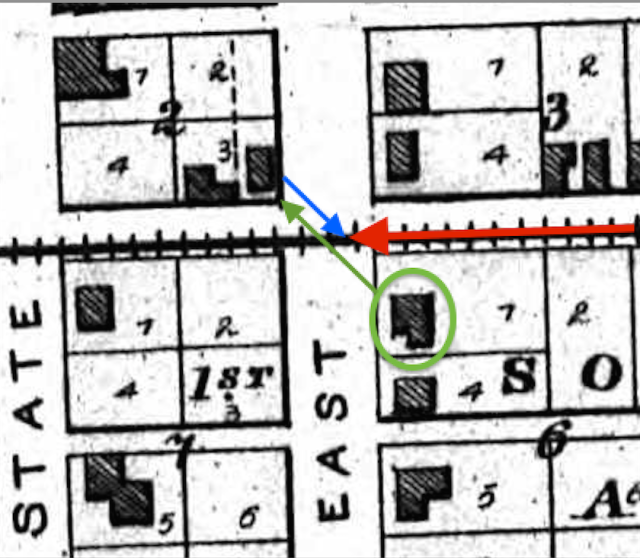 Probable map of the death event of Emily Tague on 8 November 1912 in Greenfield, Indiana. Copyright Notice: You do not have permission to download or copy this image without obtaining it from me. Thank you.

Emily Tague was buried by her husband George in Park Cemetery, Greenfield, Indiana. By my count, at her death she had two surviving sons, William and Charles TAGUE, and a daughter Sarah A. (TAGUE) VANDUYN (my ancestor). There were at least 13 grandchildren and 22 great-grandchildren alive at that time.

I think about those last ten minutes. Was my 3rd great grandmother aware of what had happened? Had she neither heard nor seen the train? Was the sun in her eyes? Was it raining? Did she slip and fall which caused her to be struck? Did Emily at that age have trouble hearing or seeing? What took her to Mr. and Mrs. Miller’s house that afternoon? What time in the afternoon? How fast was the train going? And most importantly, why was the engineer pushing a freight car, which would block his vision, without a person on the ground to make sure it was clear and/or to keep pedestrians out of the way?

I wish I could be there now, Grandmother, to hold your hand and keep you from that tragic end. You deserved better than to be alone and die in that way.

This site uses Akismet to reduce spam. Learn how your comment data is processed.