In the days before genetic genealogy, I would probably think that I had enough evidence to say that my Charles TROUTMAN of Cleveland, Ohio, and the Charles William TROUTMAN of Harrisburg, Pennsylvania, and Cleveland, Ohio, were one in the same. But DNA has spoiled me to the point that I won’t be satisfied until a few more DNA tests are taken and their results are in.

But, OH! Did a door open this weekend!

Did you read that? Let me say it again.

I now have an autosomal match (call her D) who is a descendant of a brother of Charles William TROUTMAN. When I saw that, I think I wrote the craziest genealogy message I’ve ever sent to anybody, ever, with enough OMGs in it to make a non-genealogist think I had cut off my own foot!

If Charles William TROUTMAN is my ancestor Charles TROUTMAN, who was probably the one getting into trouble in his teen years in Cleveland, then D and I are 3rd cousins. She uploaded her raw data to GEDmatch just last night (at my request 🙂 ), and is going to take advantage of the Family Tree DNA free upload. Just by looking at her Ancestry tree, whether it’s right or wrong, I was able to find a surname that I had ignored before, and match up about 10 people with me on FTDNA’s Matrix, and I found two matches on FTDNA who could very well be my cousins via TROUTMAN lines, one with a tree showing that ancestry.

The parents of Charles William TROUTMAN and Oscar Oswald TROUTMAN were Frank and Ella (SAUSSER) TROUTMAN. Here’s a Matrix combining the TROUTMAN match on FTDNA (not D, as she is not yet on FTDNA) and a SAUSER match, with their relateds. Mr. TROUTMAN Descendant (his surname isn’t TROUTMAN) is not, according to his tree, a descendant of Ella SAUSSER, and this Matrix suggests that. 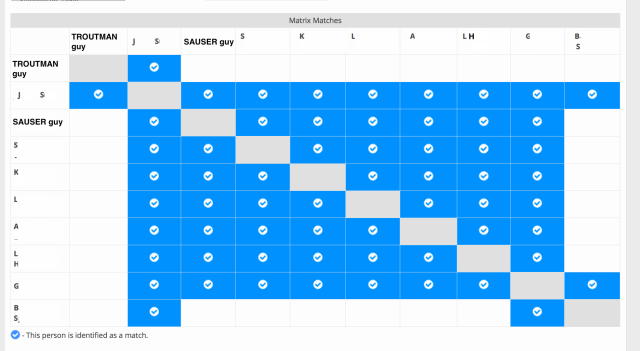 Remember when I said I had compared signatures between the two Cleveland, Ohio, Charles TROUTMANs and didn’t think they matched? Here are all the signatures, mixed up for your viewing pleasure. What do you think?

There is such a wealth of information to find. I’m not sure if I’ve been this excited about a line in a long time. This could open up my father’s entire paternal grandfather’s line. I’m not sure I’d know how to handle that!

This entry was posted in 52 Ancestors, Dad's Side, TRAUTMAN/TROUTMAN and tagged #52ancestors, SAUSSER/SAUSER/SOUSSER, TROUTMAN/TRAUTMAN. Bookmark the permalink.

This site uses Akismet to reduce spam. Learn how your comment data is processed.